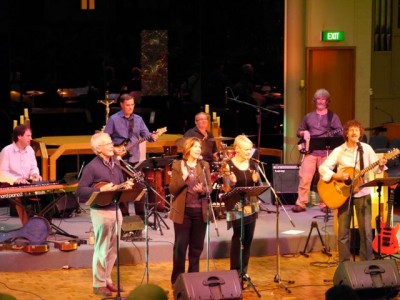 A New Year, A New Collection

The music book is at the printer (MediaCom), the completed CD's only need covers, but All Together All Right is not quite ready to launch. I’d hoped it would be out in February, but now it may be in March, but probably in April.

Sometimes quite a few things need to fall into place before a project is underway. So, a little more about songs in this seventh All Together collection.

Dorothy & I were in Cairns in 2010, singing at the PEACE Lutheran College. One of the teachers, Jodee Kingsley, sang us some songs she’d written. One especially impressed us. ‘A is for the Armadillo’ is a very catchy alphabet song, & Dorothy being a teacher of younger kids like Jodee, was sure that the under - 10’s would love it. I think a lot of plus-10’s will also get into it: ‘A is for the Armadillo, B is for the Bumble bee, C is for the Caterpillar…...

At the ‘Songwrite’ conference in Canberra in February 2013, I heard quite a few new songs, several of which are in ATAR. One is ‘Spirit of Dreaming’ by Alison Campbell Rate. ‘Spirit of dreaming, come, make of your people one. Spirit of truth, enter our dreaming now’. The song has a lovely floating quality, musically doing what the lyrics suggest.

When we record the songs for an AT book, I always hope that the songwriters aren’t disappointed in the way we do their songs. Sometimes arrangements are obvious, but now & again something unexpected develops. This happened with one of the two songs by Norman Warren. A lazy country feel just fell out, with some tasty leads from Brett Stafford. The words of ‘Out of this world’ come from Jesus’ prayer in John 17, & I think the music style enhances the reflective quality of the lyrics. ‘I have made you known to those you gave me out of this world …’

I don’t really know the origin of most of the songs in All Together books, how & why they were written. It’s a bit different for my own songs of course, though I don’t have stories behind them all. (not all like Father Welcomes for our daughter’s baptism, May we be one for a friend’s wedding). But Just like Jesus started from a news story about a crucifix immersed in a liquid people don’t like talking about, & a letter to the editor that said it was pretty close to the truth of Jesus’ story! Just like Jesus to be in stuff like this. The situations we avoid he never seemed to miss: he touched a leper’s wounded skin, he held a dead girl’s hand …