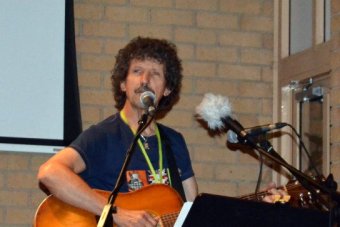 
(How shall we sing the Lord’s song in a new century?)

(Address at 2nd National Music in Worship Conference  Luther College (Croydon Vic)  20-22/4/01
How shall we sing the lord’s song in a new century?

Easter 2001: Last Sunday morning, Norm Habel preached at my home congregation, St Stephen’s in Adelaide. It’s also his home and he’s been full-time pastoring these 6 months while we wait for our new pastor to arrive.

He preached about the surprising story of Easter, based on John 20.

Jesus doesn’t rise up and tell everybody, “Hey, Look, I’m back!” He doesn’t hold press conferences, or do any kind of grandstanding. In fact it’s a very odd story. In John’s version Mary Magdalene comes to the tomb while it’s still dark, sees that the stone has gone, runs off to get Peter & John. They check it out and head off again (they probably wanted to hold that Press Conference!). Mystery, intrigue. What’s going on? Then some late angels arrive on the scene. They ask Mary why she’s crying! ‘Where’s the body gone?’ she begs.

We finished the service with ‘O Mary don’t you weep’, a version which includes some of the other surprising Bible stories.

Do we know the story so well we fail to be surprised, amazed.

DRINK HIS BLOOD?? LIFE THROUGH DEATH?  IT’S THE NEW THING

Maundy Thursday, Norm focussed on the shock of Jesus commanding his disciples to drink his blood. DRINK HIS BLOOD?? Forbidden! Taboo! They were invited, as we are, to eat Christ’s body and drink Christ’s blood.
This is not just human conventions being broken, this is religious rules of the most profound kind being shattered.

God promises us a new world, and so much in Jesus’ life tells us that it really is NEW: ‘If anyone is in Christ, they are a NEW creation’; ‘I saw a NEW heaven and a NEW earth’. God is not joking. As Brueggemann says in ‘Finally comes the poet’ “in Baptism we are invited and incorporated into an alternative dream about how the world will finally be”

The alternative world God invites us into is of course THE REAL WORLD, and not one that we construct, based on our limited imagination of how it should be. In this real world God shamelessly invites everybody to the party, and when people refuse to come (God knows why!!) he asks others. And if we wilfully leave God’s home, and then construct some half-baked speech about not being worthy to return as a son or daughter, God embraces us, and starts organising the celebration.

The methods we use can never be disconnected from the message we deliver. So if we have a message that is unconventional, unfashionable, shocking even, the methods we use are likely to reflect this.

And of course we’ve got an excellent teacher. Jesus used decidedly unconventional means to communicate. Time and again he wanted to make sure that people did not misunderstand him, to make sure that people didn’t lump him in with other so-called “religious” teachers. So when a crippled man was brought to him on the Sabbath, he didn’t tell him that he’d drop by tomorrow, like a good doctor, and fix him then. Likewise when he and his disciples walked through a field picking the heads of wheat on the Sabbath, it was hardly accidental. Jesus was doing something new. He wanted to upset the keepers of the old rules — & he succeeded!. Religion of that old kind was finished. Trust me, says Jesus, not the Sabbath rules.

GOD IS HUMAN AFTER ALL

I first became acquainted with Norm Habel’s work through some poems and songs in the late 60’s. One poem was called ‘God is human after all’. This concept runs through all of Norm’s work:

The most unexpected thing about God is that the one who makes starfish and galaxies, tidal waves and ladybirds, this God became a human being. This fact alone is enough reason for us to puzzle and wonder about God for our entire lives.

All that we do in Christian communities should in some way reflect and broadcast this wild and unbelievable notion. Not only does God become human but we are told in the New Testament that from now on there’s no other reliable way for us to understand God. Just through Jesus:

No-one comes to the Father but through me

They saw no-one but Jesus

This is my only beloved son. I am pleased with him

I think we become so used to this idea that we take it for granted. It no longer surprises us. But it’s a staggering thought.

And not just that he was here once, but that he’s always here now

GOD IS NEAR, CLOSE, HERE — NOT SOMEWHERE ELSE

We don’t need to be lifted into God’s presence by religious activities. This venture is doomed to fail. We are incapable of reaching God.

And yet, time and again, this is either the underlying or the clearly stated aim of so-called ‘worship’ songs.

God has come to us — here, in this place, in this mess, in this physical world. God has become physical. Skin and bone, blood and hair. With a body largely composed of water. A heart and a head, a digestive system, a brain, eyes, ears, tongue, teeth, fingers and toes – ‘God With Us’.

If we are to have songs that bring us close to God, they need to capture our imagination with this strangely physical divine person. We don’t need songs to transport us to some imaginary spiritual world. The spiritual world is here! What we need are repaired, informed senses that are capable of experiencing the presence of God in Jesus and, as a result of his coming, to see God in all created things.

To see a eucalyptus leaf, and be intrigued by its shape, its shading, its marking. And to think: this was made through Jesus, the eternal word.

Or to see or feel the whiskers of a cat, to notice how sensitive they are to touch. And to think: this was made through Jesus too

To open the compost bin and see a big fat slug on the moist rim. This was made by God’s imagination, through Jesus.

Through him all things were made (John 1:3)

(CEV) Now at last God sent his Son to bring his message to us.
God created the universe by his Son. (Heb 1:2)

The religious people of Jesus’ day could not accept a pathetic God who won through failure, whose foolishness looked ridiculous to worldly wisdom.

And it’s no different today. The church – made up of religious people like you and me – looks to the ways of the world to guide it. We want to be solid and sensible, use good marketing strategies and clever media angles if we can manage it. And all the while our leader and teacher is born to a peasant woman, in the stable of a nondescript inn, in an ordinary town ( we always thought Tailem Bend in SA would be a good equivalent) and he comes to a dirty and disgusting end on a gallows. And this, according to John’s gospel especially, is Jesus’ glory on display.

An artwork in Melbourne a couple years back upset many Christians. The work, ‘Piss-Christ’ had to be withdrawn. But whatever the intention of the artist, the work preached the truth about Jesus’ death better than many sermons.

GOD LOVES THE WORLD AND REVELS IN IT

It seems that in religions of all kinds there is a strong leaning towards favouring the spiritual realm over the physical. The physical is second-rate, dirty, unspiritual. We need to rise above it, escape it, leave it behind in order to have a spiritual experience, enjoy true freedom and a relationship with God.

This tendency can certainly be seen in ‘so-called’ Christian songs. Consistently, in both traditional and contemporary areas, songs use language, music and lyrics, that is religious in nature. In contemporary songbooks the “religious” words like ‘glory’, ‘holy’, ‘redeemer’, ‘lord’, ‘majesty’, ‘awe’ are required to make the song acceptable. This communicates, I believe, that the God being sung about is beyond, above, not in this world. It certainly seems, even at a quick glance, that Jesus never was a human being.

‘Majesty’ is a first-class example: “Majesty, worship his majesty. Unto Jesus be all honour, power and praise”. Only 3 words are non-religious, this world words, and even ‘All’ in this context functions as a religious word. God’s majesty is not what I worship. I might be able to imagine it, but I really don’t know anything about it. God knows that, and so God came down to our level, and even lower. Christ crucified has been revealed. Even in Revelation, the object of adoration is a Lamb with its throat cut

In the more traditional area, ‘Away in a Manger’ is a classic example. ‘No crying he makes’ — is this child human, or not? Of course Jesus cried. To deny that he did is to say God never became human.

One of the most surprising things about the Christian revelation is that God not only makes the world, but God loves it so much that he can’t bear to keep out of it. Time and space, sounds and smells, tears and laughter, words and music.

For people who know a little Lutheran teaching it shouldn’t be so hard to understand this. After all we were raised on the concept of ‘in with and under’. The spiritual realities — salvation, new life in Jesus, victory over sin, death and the devil – are hidden ‘in, with and under’ the word and the water, the bread and wine. They look ridiculously weak and ineffective — like Jesus dying on a cross — but God promises that here is everything good.

QUESTIONS AND DOUBTS ARE OK

A relationship is a living thing. It’s not fixed in concrete. It’s OK to express doubts, to ask questions. You are part of the family. God says so, and family members can ask as many questions as they like. The Psalms and OT are full of questions. They also have anger and disappointment.

GOD’S STRANGE WAYS —
THE STRONG & WISE IN THE WEAK & FOOLISH

There is a natural human tendency to think of God in certain ways: God is big, beyond, strong, just, wise, respectable, clean, moral.
But are these things true for the God revealed in Jesus?

The basic Lutheran approach, Luther’s Theology of the Cross, turns most of our thinking on its head:

We don’t find God: God finds us
God is hidden in weakness, not revealed in glory
God suffers, is not triumphant
God’s wisdom looks foolish,
God’s strength looks weak
We live by faith, not by signs or miracles
God is at work through the apparently insignificant,
through water and word, through bread and wine
we are not called to a victorious life, but to take up our cross & follow

If we are going to sing the Lord’s song in a new century we better learn the words, and the tune God’s given us as well!